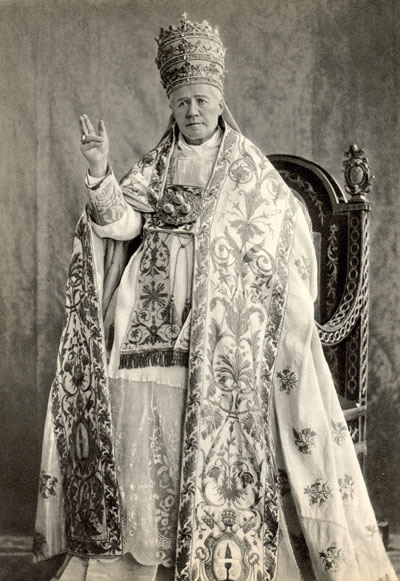 POPE Francis acknowledges the ruin of the Church. A hundred years ago, St. Pius X foretold it. From the time of his accession in 1903, in his very first encyclical, he denounced the folly of human pride that draws down on the world God’s Wrath and the chastisement, which alone will prepare the way of conversion and salvation for men.

St. Pius X opposed the apostasy of formerly or apparently Catholic States and parties, disguising their culpable infidelity beneath the odious titles of liberalism, secularism and democracy with the law of the Gospel, according to the doctrine of Saint Paul : “ Omnia instaurare in Christo. ”

As a disciple of this holy Pope, Fr. Georges de Nantes recalled this “ orthodromy ” in the main lecture hall of the Mutualité, in Paris, on November 11, 1994 :

“ In 1905, he saw the unilateral breaking of the Concordat decreed by the Republican State, aggravated by persecution, despoiling and exiling the clergy and religious Orders in France.

“ In his encyclical Vehementer (1906,) this holy Pope foresaw the chastisement of the Church’s eldest daughter but also her eventual recovery…

“ Through what trials ? He saw them in visions. He prophesied the imminent unleashing of the chastisement; he announced its forthcoming date and he knew the devastation it would cause.

“ It was with anguish that he spoke about it with Cardinal Merry del Val in 1911 : ‘ Eminence, things are going badly ! The Great War is coming... ’ It was he who first pronounced the title ‘ Great War, ’ before it was repeated by word of mouth and consigned to print forever... ‘ il guerrone. ’ To the ambassador, Dr. Chaves, he said : ‘ You are fortunate, Minister, to be able to return to Brazil ; in that way, you will not see the world war... The conflict in the Balkans is but the beginning of a great conflagration, which I cannot prevent, and which I shall not resist. ’

“ And again, with amazing precision, he said : ‘ I feel sorry for my successor ! I shall not be here to see it ; but it is unfortunately true that Religio depopulata is imminent... Eminence, we shall not live out 1914. ’

“ During the last days of the month of July, he wrote a long letter to the aged Emperor Francis-Joseph. The letter, however, remained unanswered. All his efforts were to be in vain. Thus when the ambassador to the Vatican came to announce the fait accompli of a declaration of war against Serbia and to ask, in his master’s name, a blessing on the Austrian armies, Pius X severely replied : ‘ Tell the Emperor that I can bless neither the war nor those who wanted the war : I bless peace ! ’As the other insisted that at least he give a special blessing for Francis-Joseph, the Pope declared : ‘ I can only pray that God will pardon him. Let the Emperor think himself fortunate not to have received the curse of the Vicar of Jesus Christ. ’

“ ‘ To want peace without God is an absurdity, ’ such was his profound conviction. Turning towards God, he implored Him in these terms : ‘ Lord, take my miserable life, but stop the massacre of so many of my children. ’ Then when the blood began to flow in the four corners of Europe, he consecrated himself as a holy victim together with the soldiers falling on the battlefield. Weeping, he repeated : ‘ I offer my wretched life as a holocaust to prevent the massacre of so many of my children. ’

GEORGES DE NANTES, THE ONLY DISCIPLE OF ST. PIUS X

“ ‘ By what authority are you doing this ? ’ Msgr. Hamer asked me, literally repeating the question addressed by the high priests, the scribes and the elders to Jesus, in Saint Matthew, chapter 21. If I dared, but I must dare, imitate Our Lord under this impending condemnation to spiritual, or at least ecclesiastical, death, and for the manifestation of the truth, ‘ I too shall put you a question ; if you answer me, I shall tell you by what authority I do these things. ’ (Mt 21:24) :

“ By what authority did Saint Pius X promulgate the encyclical Pascendi Dominici Gregis, unmasking and condemning Modernism, on September 8, 1907, and the Letter to the Bishops of France on the Sillon, criticising and rebuking the entire politico-religious doctrine of its ‘ Christian democracy, ’ on August 25, 1910 ?

“ The rest you know from Saint Matthew’s Gospel : ‘ They, however, reasoned among themselves saying, If we answer : From Heaven, He will say to us : Why then do you not believe in him ? And if we answer : From men, we shall have the crowd to fear for they all regard Him as a prophet. So they answered Jesus saying, We do not know. Then He answered them : Neither do I tell you by what authority I do these things. ’

“ It was obviously a trap. Jesus did not hide the fact that He was laying a trap for the religious authorities with the clear aim of making manifest the truth of His mission and the perfidiousness of His gainsayers. He proffered them this trap in that upright and irrefutable manner characteristic of His whole attitude during the trial that was to lead Him to His death. I know that Msgr. Hamer does not like me to take Our Lord for a model, contesting in advance all resemblance between His difficulties and mine. Yet I would rather imitate Our Lord, however remotely, than closely, too closely, imitate the Pharisees, scribes and high priests. It is thus that I always answer all your questions. And you, you never answer ours.

“ You cannot answer any more than Caiphas could. You cannot even answer as he did in the words, ‘ We do not know. ’ It is your duty to know, and you know it very well. We too, with all the faithful, just as all the people of Jerusalem in Christ’s time knew that John the Baptist was the greatest of the prophets, the precursor of the Messiah, we know that Saint Pius X was given to this apocalyptic century at its dawn to be a memorial of the Catholic Faith, a beacon of sacred doctrine against the powers and the hour of darkness. Our faith is his, and his moral, political and aesthetic doctrine is also ours. We are nothing other than his children and his disciples. Our spiritual fate is tied to his, oh joy ! Hence his doctrine, his virtue, and his glory are implicated in the fate awaiting us.

“ What will you answer us ? If you say that the Magisterial teaching of this saint comes from the fallible and passing man Giuseppe Sarto, who ‘ was steering the bark of the Church towards a blunder ’ to use Msgr. Duchesne’s charming expression, you will be justified in imposing on the Church the doctrines found therein to be clearly condemned and, I may add, irreformably proscribed by name. By that token, however, you will confess yourself to be schismaticwith regard to the Church of Peter, You will cut Yourself off from the apostolic Succession and from the Catholic communion, as the high priests of Jerusalem in refusing John’s baptism excluded themselves from the promise of salvation and ended as deicides.

“ If, on the other hand, you recognise that this teaching of the holy Pontiff and magnanimous Doctor of the Church in our century is from God, then all evolutionist subterfuge excluded, you will be forced to declare Yourself heretical, You and all your band of Reformers, whether progressivists or Modernists, the perfidious heirs of that brood of vipers whom Saint Pius X wished to extirpate forever from the Church’s fold, but without success, on account of their malice, considering them to be the most deadly and diabolical of adversaries. You will then be obliged to retract or to resign.

“ I know that you will never answer this question. Nevertheless, I have put it to you, that the People of Jerusalem may know who has God for Father, and who has Satan (Jn 8:41).