Can the Old Testament Be Trusted?

1. Emmanuel Anati’s Oeuvre
and the Long Chronology of the Old Testament

THE archaeological site of Har Karkom makes it possible not only to locate, but also to date the biblical account of the Exodus. The traditionally accepted chronology must consequently be modified by about 1000 years. This new chronology permits us to insert all the Biblical events before and after the Exodus (from Abraham to David) into the framework of history such as archaeology allows us to reconstitute it, to such a point that this dating thus modified now appears to be an inescapable truth of Sacred History.

WHO IS EMMANUEL ANATI?

Nothing predisposed this Italian archaeologist, a specialist in prehistory, to be interested in the Bible. More than twenty years of excavations on more than 1200 sites methodically inventoried by his team of researchers brought him there. The site of Har Karkom, the prospection of which he directed, held many mysteries; this rocky mountain had, without a doubt, once been (between 4000 and 2000 b.c.) a place of much religious activity, During their investigations, Anati’s team, which had been led to open the Book of Exodus, found themselves faced with an incredible correspondence between what was written in it and what they had observed in the field. This scientific conformity was sufficient to identify it as the true Mount Sinai! 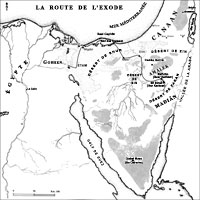 Har Karkom, the “mountain of Saffron,” rises to 847 metres above sea level. It is located almost two hundred kilometres north of Djebel Musa at the foot of which stands the Monastery of Saint Catherine, and which is traditionally considered Mount Sinai. Yet, contrary to Djebel Musa that provided no proof of any cult before the Byzantine era, Har Karkom presents all the characteristics necessary for identifying it with the Mountain of God referred to in the book of Exodus. This mountain dominates a region known in Hebrew under the name of Midbar Paran, that is, “the desert of Paran,” which corresponds very precisely to the text that we read in the book of Exodus:● (For more details on the archaeological site of Har Karkom, see the sections: The Book of Exodus and Biblical Archaeology, From Egypt to Sinai and The Book of Exodus and Biblical Archaeology, From Sinai to Kadesh-Barnea.[Soon to be published])

After this first discovery, the team of researchers continued their on-site investigation with the Bible in their hands, and succeeded in reconstructing the entire route of the Exodus. Anati’s working hypothesis was that the texts refer to specific geographical locations, known to those who wrote these traditional narratives. For the archaeologist, the 300 sites of artefacts studied at Har Karkom undeniably indicate that a migrating people did sojourn on these same locations. From this fact it is but a short step to believing that all the divine interventions related in Holy Scriptures are true. Anati, however, affirmed that this was beyond his field of competence. Ah, really? In this case we will have to express some reservations later, when we suddenly see him declare himself “competent” to explain certain miracles related in the Exodus simply by natural phenomena alone!

For us, the conclusions that Anati draws from his astonishing discovery do not go far enough. For the Modernist exegetes, who deny a priori and categorically any historical basis for the biblical narrative. It is for this reason that Anati’s works still remain virtually unknown today, surrounded by a knowing silence in the world of biblical science.

THE LONG CHRONOLOGY OF THE OLD TESTAMENT

Anati’s revolutionary discovery not only allows us to determine Mount Sinai’s location, but after ascertaining the age of the inventoried artefacts, an adjustment of the conventional chronology of the Old Testament becomes necessary, and therefore a redating of the Exodus, as follows:

(2750 b.c.): the Covenant with the founding Patriarchs of the people of Israel: Abraham, Isaac and Jacob.

(2250 b.c.): the Covenant with the people of Israel, having left Egypt five hundred years later under the leadership of Moses.

(1000 b.c.): the Covenant with David, King of Israel, the ancestor of the Messiah who would make his appearance a thousand years later.

“Therefore they set taskmasters over them to afflict them with heavy burdens; and they built for Pharaoh store-cities, Pithom and Rameses.” (Ex 1:11)

Rameses, the capital of Egypt in the north of the delta, took this name during the reign of Rameses II. The city having been rebaptised as Rameses after 1300 B.C., the conventional interpretation placed the Exodus subsequent to this date. Archaeologists, however, have found no vestiges dating from this time on the sites where the Old Testament describes the Hebrews as having travelled through! So what exactly took place?

Anati, too, is adamant: none of the sites recorded at Har Karkom can be dated between 1950 and 1000 B.C. Since the same holds true for all the other sites excavated in the desert zone to the south of the fertile Crescent, in the Negeb and the whole of the Sinai peninsula, the programme “The Bible Unearthed” concluded by denying any historicity to these sacred texts. For example, it so happens that no vestige from the 13th century was uncovered at the site of Kadesh-Barnea, where the Hebrews resided for thirty-eight years!

These archaeological data logically lead us to contest the traditional chronology which, as we have seen, is based merely on a hypothesis of exegetes. In fact, the mention of the cities of Pithom and Rameses gives us information about the period at which the text was written, but not about the date of the historical event that it relates. Anati observed: “It is like saying that Saint Catherine has Palaeolithic habitation sites; that does not imply that the locality was called Saint Catherine in the Palaeolithic age.”●

The conclusion will become progressively more self-evident as we detail each result of his excavations: the archaeological site of Har Karkom shows us that the Exodus did not take place in the 13th century b.c., but a thousand years earlier!

This new chronology also gets us out of a blind alley created by the traditional “short” chronology, for it produces what Anati calls a “time compression.” In fact, how could we conceive that all the founding events of the chosen people took place in less than three centuries? It suffices to list them: The transformation of the condition of the Hebrews reduced to slavery in the delta, the flight of Moses to Midian, his return to Egypt, the Exodus, the sojourn in Sinai and in Kadesh-Barnea, the period of nomadism or wandering in the desert, the conquest of Canaan and the time of the Judges!

If you think about it, this last phase especially, during which the nomads were transformed into a nation of refined farmers as the book of Ruth illustrates, must have taken place very slowly. (…)

Excerpts from Can the Old Testament be Trusted? A reply to the programmes of the television channel Arte: The Bible Unearthed (2). The Exodus, the miraculous birth of the Chosen People, He is Risen! no. 45, May 2006.

Now Moses was keeping the flock of his father-in-law, Jethro, the priest of Midian; and he led his flock to the west side of the wilderness, and came to Horeb, the mountain of God.