Establishing a scientific translation of the Qurʾān according to the rules of the historical and critical method entails an arid discussion of the meaning of words by having systematic recourse not only to Semitic linguistics, but also to Greek and Latin linguistics. Since not all of our cultured and benevolent readers are equipped with such knowledge, we propose three reading levels to visitors so that everyone can benefit from the results and discoveries of Brother Bruno’s long and fastidious work.

After having studied this introduction to familiarise themselves with the interface specific to this new section on the Qurʾān, with the conventional symbols used in the documents, and with the tools provided for better understanding the text (glossary, lists of abbreviations, etc.), readers may choose the level that corresponds best to their knowledge and their objectives.

Level 1: is for those who have no background in linguistic studies but who wish to gain general knowledge about the linguistic and historical discoveries made by Brother Bruno.

Level 2: is for those who are interested in reading the translation of the Qurʾān that results from the scientific, linguistic analysis of its text.

Level 3: is for those who want to delve into Brother Bruno’s arduous verse-by-verse, word-by-word analysis of the text.

This level is intended for those who have no background in linguistic studies but who wish to gain general knowledge about the discoveries made by Brother Bruno in his linguistic and historical studies of the Qurʾān, and the scientific conclusions that must be drawn from them.

It is easy to determine which documents contained in the Table of Contents correspond to this Reading Level. Every red hyperlinked title gives access to a Level 1 document. Click directly on the title.

Some Level 1 documents are integral parts of the Volumes of Brother Bruno’s Translation and Systematic Commentary on the Qurʾān.

Other documents, gathered under the heading Additional Articles are documents that have been published over recent years in He is Risen! They present many of Brother Bruno’s linguistic and historical discoveries in a popularised form for non-specialists.

As in all scientific studies, Brother Bruno indicates his sources in notes. The simple references are presented in pop-up boxes indicated by blue hyperlinked dots in the text (e.g. ●). These boxes will be of particular interest to specialists whom we also encourage to read the Level 1 documents before delving into the higher levels. Ordinary readers may prefer to disregard these blue dots.

We have also added to Brother Bruno's study complementary information in other pop-up boxes, for instance, short biographical notes on all the people to whom he refers. (E.g. Father Georges de Nantes.) 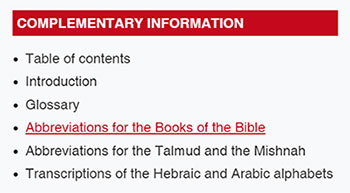 Finally, the following links that present further complementary information have been added to the documents:

Those visitors who feel that Reading Level 1 best suits their interests may now exit from this introduction to begin their discoveries by choosing a document from the Table of Contents. Remember, the documents that have red hyperlinked titles (e.g. Interpretation of Sūrah 1) are the ones that correspond to this level.

This level is intended for those who want to read Brother Bruno’s translation of the Qurʾān, the result of his arduous linguistic analysis.

Nevertheless, it is highly recommended, for better comprehension of this text, that those who have chosen Level 2 read also the Level 1 documents that precede and follow the sūrahs (prefaces, postfaces, interpretations, explanations).

Every document in the Table of Contents that has a title in black characters can give access to the Qurʾānic text alone, if readers select the hyperlinked: Level 2 placed after this title. A green-framed window will appear with the Qurʾānic text independent of the critical apparatus.

If, for any reason, readers would like to read Brother Bruno’s analysis for a particular verse, they only have to click on the hyperlinked verse number, and they will automatically be taken to Reading Level 3. The Qurʾānic verse that interests them will be highlighted in its green-framed window, and Brother Bruno’s analysis will be shown in the blue-framed window that will then appear on the screen. To return to Reading Level 2 readers only have to click on the toolbar button marked “2.” (Before going to Brother Bruno's analysis, however, it would be advisable for Level 2 readers to return to this introduction to read Description of Reading Level 3)

DESCRIPTION OF THE TOOLBAR

In Reading Levels 2 and 3, readers will find a toolbar along the top of the green-framed window.

The Toolbar button marked “TOC” allows readers to reach the Table of Contents for the entire section on the Qurʾān.

The button marked “In” allows readers to return to this introduction every time they need to refresh their minds about an aspect of the functioning of this Qurʾān section.

The buttons marked “2” and “3” allow readers to toggle between Reading Levels 2 and 3.

The remaining buttons on the toolbar give access to secondary windows containing useful information in new browser tabs. When you have finished consulting simply close the browser tab:

Those visitors who feel that Reading Level 2 best suits their interests may now exit from this introduction to begin their discoveries by choosing a document from the Table of Contents. Remember, to read the Qurʾānic text alone, click on the red hyperlinked Level 2 after the black-titled documents.

This level is intended for those who want to delve seriously into Brother Bruno’s verse by verse, word by word, linguistic analysis.

It is essential for those who undertake this in-depth study to read all Level 1 documents contained in Brother Bruno's three volumes.

A Level 3 document give access not only to Brother Bruno’s translation of the Qurʾānic text, but also to his linguistic analysis and commentary. To open a document in the Table of Contents in the Level 3 mode, click on the red hyperlinked Level 3 after its title in black characters. 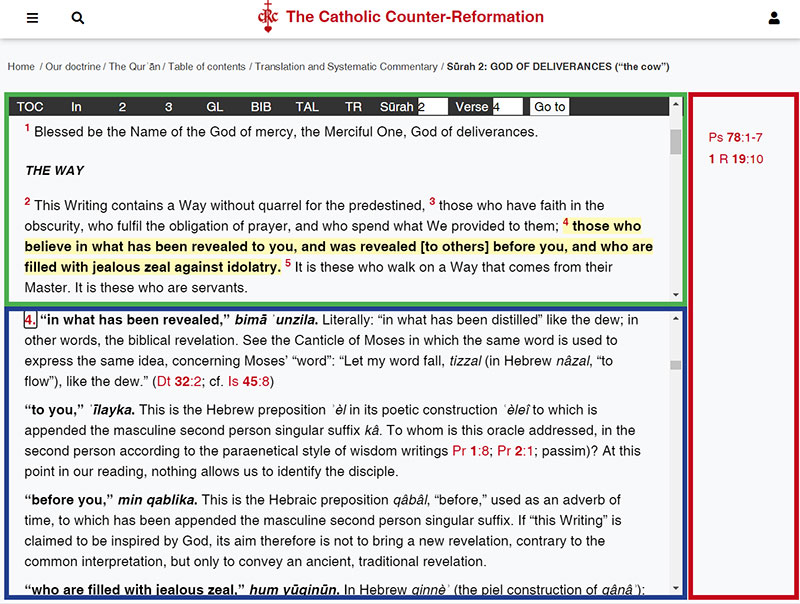 Readers can scroll up and down the text in the green and the blue-framed windows independently. It is preferable, though, that the information appearing in both of these windows concern the same verse of the Qurʾān. At any time, readers may realign the contents of the three windows by clicking on the hyperlinked verse number, either in the green or the blue-framed window.

For example, if a reader were to click on verse number 24 in green-framed window (containing the Qurʾānic text), this verse will be highlighted, Brother Bruno’s analysis of this same verse will shift so that it begins at the top of the blue-framed window and, in the red-framed window, the references that correspond to verse 24 will appear.

If, on the other hand, it were in the blue-framed window (containing Brother Bruno's analysis) that the reader clicked on this verse number 24, this verse of the Qurʾānic text will be highlighted and shifted to the middle of the green-framed window so that both the verse and its explanation are visible in their respective windows.  Finally, of course, the references that correspond to this verse 24 will appear in the red-framed window.

For the purposes of his analysis, Brother Bruno deals with the segments of each verse one after another. These segments are in bold characters in his analysis so that the reader's eyes can easily shift back and forth between the segment in the highlighted Qurʾānic verse and its explanation in the analysis.

A word may be found many times throughout the Qurʾān, but Brother Bruno analyses it only once, the first time it appears in the text. In his books, when he came across subsequent occurances of the same word, he referred readers to his initial explanation so that they could turn back the pages to reread the explanation. We have replaced these references by a hyperlinked green arrow.

When readers click on this arrow, a new but totally identical browser window, will open to the place in the study where Brother Bruno made his initial analysis. The reader's eyes will be drawn to the precise words in the text that contain the explanation by a flashing yellow highlighting. The exact location (sūrah and verse number) of this initial analysis is indicated in the toolbar search box. After you have studied the word's explanation, close this supplementary browser window in order to resume your reading.

Those visitors who feel that Reading Level 3 best suits their interests may now exit from this introduction to begin their discoveries by choosing a document from the Table of Contents. Do not forget that to truly benefit from an in-depth Level 3 study, you should begin by reading the Preface, and after reading a sūrah, examine the Level 1 documents that follow it.  Remember, to open Level 3 documents, click on the red hyperlinked Level 3 after the black-titled documents.

Hirschfeld has a different explanation. He conjectures that “the disfigurement of many Biblical names and words mentioned in the Qorân is due to misreadings in his (Muhammad’s) own notes made with unskilled hand... Surah, written in square characters (סורה) could easily be misread from Sidra (סדרה).” The interpretation is plausible if one considers the external and post-Qurʾānic data concerning the identity of its author. Internal criticism alone, however, has already allowed us to recognise too shrewd a biblical scholar to adopt such a conjecture. The transposition of the Hebrew roots into Arabic subjected them to a definite transformation, but it is the work of a masterful hand. 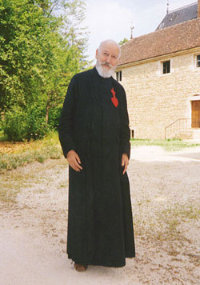 Father Georges de Nantes. Defender of the Faith, founder, theologian, (1924-2010). Georges de Nantes was ordained priest in the Diocese of Grenoble, France, in 1948. Besides his degrees in theology and scholastic philosophy, he also obtained degrees in socio-economic science at the Catholic University of Paris, and in literature at the Sorbonne. While Professor of Philosophy and then of Theology in various religious and university institutions between 1948 and 1958, he contributed articles to several Parisian periodicals of the Catholic and Nationalist Right.

Events led him to undertaking a twofold fight: firstly, from 1962 on, he combatted the heresies of the Second Vatican Council – the cause of the great apostasy in the Church – and against those responsible for it, the Popes John XXIII, Paul VI, John Paul II and Benedict XVI. Father de Nantes went three times to Rome (1973, 1983, 1993) to lodge canonical proceedings. Each time, Rome committed an abuse of authority by not opening the doctrinal trials required by Canon Law. These repeated appeals to Rome prove his indefectible faith in the Church.

Then, from 1968 on, he led the attack against an even greater peril, the integrist schism, which was threatening to tear the Church apart. He thus became the leader of the most dynamic traditionalist movement in the French Church (The Catholic Counter-Reformation), and the founder of flourishing religious communities (The Little Brothers and Little Sisters of the Sacred Heart).

At the same time, Father de Nantes prepared for the restoration of the Church by elaborating a project for a reparatory Third Vatican Council. He reformulated all domains of Church doctrine to facilitate a Catholic renaissance throughout the world.

Father de Nantes and the Qurʾān. When he was a contributor to the periodical L’Ordre français, he reviewed the book De Moïse à Mohammed, of the learned Dominican medievalist, Father Gabriel Théry, which had been published under the pseudonym of Hanna Zakarias. Father de Nantes immediately understood its capital importance: Father Théry was the first scholar to have taken the liberty of reading the Qurʾān as a document of the past and of seeking to explain it by the simplest laws of the historical method, long in use even within Catholicism in the study of the Bible. Understanding that it was absolutely necessary to carry this work to its ultimate end: a truly scientific translation of the Qurʾān, Father de Nantes assured that his disciple, Brother Bruno Bonnet-Eymard, acquired the linguistic and historical knowledge required for undertaking this most urgent task during his seminary training. This section of our website has been created to present to you this truly scientific translation of the Qurʾān, the fulfillment of Father de Nantes' most fervent wishes.