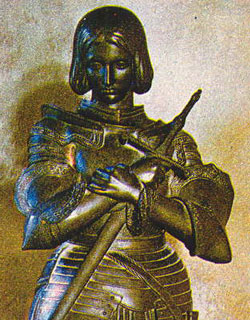 LIKE mother, like daughter : « Joan the Maid, daughter of God », as her Voices called her, was, in the fifteenth century, the faithful image of the Virgin Mary. Jean Gerson, Chancellor of Notre-Dame and of the University of Paris, the first French doctor of the Immaculate Conception, unhesitatingly replied to Charles VII when asked what he made of Joan : The Maid saves France in the same way as « by a humble Virgin the Redemption of the whole human race was wrought ».

And firstly, she is the miniature of the Immaculate Conception , as her name of “ Maid ” suggests. That she was a virgin in her soul as much as in her body, we can affirm with absolute certainty, following Charles Boulanger : no worldly corruption tainted her during her perilous mission. She refused to recant, she signed nothing, no cedula [retractation document], neither short nor long… All the witnesses who testified to the contrary are liars. She is spotless1.

When she declares to her judges at Rouen : « I came from God. Send me back to God from whom I came », she speaks as Jesus did. So whom does she resemble, Jesus or Mary ? Both, since They are but one ! The whole of Joan’s short life was like the course of a giant, in close conformity with the Gospel, from her humble birth to her assumption into glory.