The Catholic Church in the United States 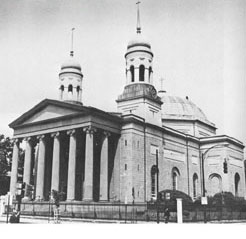 THE United States is usually presented as a very religious nation – its national motto is, « In God we trust ». In reality it has been a secularised nation ever since the Constitution’s first amendment was passed in 1789, which proclaimed religious freedom and the principle of separation of religion and the State. Yet, the Catholic Church there experienced a development that seems spectacular: in 1790, the year when America’s first Bishop was consecrated, there were only 25,000 faithful, less than 1 % of the population then. Today 22 % of Americans are Catholic and represent the country’s largest religious «denomination» after the «Evangelists» (23 %). Actually, a chaotic history is hidden behind this good result, a history that is a perfect illustration of the dangers and the illusion of the « social right to religious freedom » for the Catholic Church.