NOSTRA ÆTATE
IX. The Salvation of the Human Race 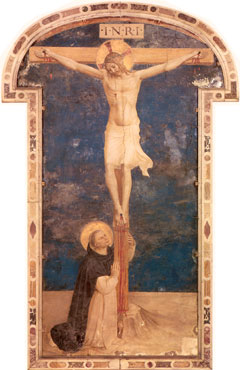 AFTER liberty has been recognised to all men to chose their religion, without any human or divine authority being able to prevent or constrain them in any manner; after the notion of equality has forbidden any “Church”, especially the Catholic Church, to claim to be the unique and infallible interpreter of the Thoughts and Will of God; here now is fraternity, through which, humanity, reconciled in the respect of all beliefs, will no longer experience any religious, cultural, racial or social discrimination.

Such is the new form of universal salvation that the Church preaches since the Council. It is the Masdu, denounced as early as 1965 by Fr. de Nantes, aiming no more no less at establishing world peace through harmony between all religions. Nostra ætate, promulgated at the Council on October 28, 1965, is the declaration of this principle, with a spectacular advance made in favour of Judaism. « This declaration is set in the heart of the Council. It symbolises “Vatican II”. » (Father Henry, Unam Sanctam no 61, p. 11)

The tenacious opposition to this text that was seen from November 1964 to October 1965, dropped sharply when it was seen that the Pope declared himself in favour of it. Ninety-nine Fathers resisted to the end, but none of them dared rise up publicly to say that such a declaration was a disavowal of the Cross of Christ.

What a strange preamble for a text of the Council! « In our time, when day by day mankind is being drawn closer together [?], and the ties between different peoples are becoming stronger, the Church examines more closely her relationship to non-Christian religions. In her task of promoting unity and love among men, indeed among nations, she considers above all in this declaration what men have in common and what draws them to fellowship. One is the community of all peoples, one their origin, for God made the whole human race to live over the face of the earth. One also is their final goal, God. His providence, His manifestations of goodness, His saving design extend to all men, until that time when the elect will be united in the Holy City, the city ablaze with the glory of God, where the nations will walk in His light. »

It is stupefying and scandalous that the entire Catholic Magisterium adopted, without batting an eyelid, this fundamental premise of a universal fraternity, a veritable contradiction of Divine Revelation and the foundation of an antichrist humanism. God is said to be the Father of all men; they are consequently all brothers, and all discrimination between them must be abolished: such is the new creed of Vatican II, more Masonic than Christian, repeated thousands of times by Paul VI and John Paul II these past forty years. Without other results than incessant wars, divisions and persecutions...

« Our faith erects the Cross of Jesus at the centre of human History, explained our Father. It is the Event towards which converge all human aspirations for eternal salvation and from which flow all graces for everyone. Humanity, a single family dispersed by original sin, divided in every way, must not and cannot regain its unity and its fraternity other than in this Christian salvation resulting from the redeeming Cross. Legitimately, since the death of Christ, all men are reconciled with God who wants all of them for adoptive sons. But, in reality, they only enter into this fraternity through their membership, implicit or explicit, in hope or in act, in the Church born of Jesus’ pierced Heart. The Church is thus the Mystical Body of Christ, the unique and universal sacrament of salvation. This is what her name of “Catholic” expresses. » (CCR no 29)

« The Catholic Church, one can read at number 2, rejects nothing that is true and holy in these religions [pagan, or oriental, “that are bound up with an advanced culture” such as Hinduism and Buddhism]. She regards with sincere reverence those ways of conduct and of life, those precepts and teachings which, though differing in many aspects from the ones she holds and sets forth, nonetheless often reflect a ray of that Truth which enlightens all men… »

All the true specialists of these religions will say that this is a very partial view. In reality, « under their shining forms, referred to in the Declaration, a fundamental paganism, or rather an absence of God subsists, which makes all solutions other than conversion impossible », wrote our Father. Now, it is precisely the opposite of a call to conversion that the Council addresses to them when it exhorts the Catholic faithful « so that through dialogue and collaboration with the followers of other religions, carried out with prudence and love and in witness to the Christian faith and life, they recognise, preserve and promote [!] the good things, spiritual and moral, as well as the socio-cultural values found among these men. »

Father Caspar, White Father, who comments in Unam Sanctam on no 3 of the Declaration, remarks the Church’s turn around in favour of Islam: « The time had come for the Magisterium to declare itself on Islam in positive terms, putting an end to a history consisting of struggles and of defiance, and marking the start of a new era of comprehension and collaboration. [You have to read it to believe it…] Instead of focusing, as in days gone by, on the (individual) salvation of infidels, she endeavours to find a divine intention and mediation specific to religions as social bodies. » (p. 212)

The Council outlines Muslim worship, « prayer, alms, and fasting », while omitting holy war, which is also a “pillar” of Islam! It does not reveal either, its absolute negation of three essential Christian mysteries: the Holy Trinity, Incarnation and Redemption. In short, « it is wrong and it deceives us about Islam. It does this knowingly, voluntarily, under the constraint of its basic premise of a “unification of the world” from which would follow the need of “passing from confrontation to dialogue, from competition to collaboration.” » And our Father draws the conclusion: « The Jihad will reply to these utopias and we will be left with praying for new Lepantos! » (CCR no 30)

More cowardly and perfidious yet is the Council’s forgiveness of the Jewish people’s responsibility in the drama of Redemption.

The authors of Nostra ætate tried desperately at no 4 to mix and confuse the three faces of Israel, which our Father, distinguishes, along with all the Tradition:

1. Israel, God’s Chosen People of the Old Testament, until the time of Christ. Its divine mission was to prepare for the coming of the Messiah and with this its mission is brought to a close. The Church took over from this Israel. She is the unique and legitimate heir to this sacred mission.

2. The Jewish people, since the time of Christ. This people is called to conversion and baptism, like all the others, but with a particular urgency and special love since it is closer than all others to salvation by its ancient patrimony, but further away, more opposed and rebellious by its recent patrimony.

3. Talmudic Judaism, the religion of the Jews who refused the Gospel accusing it of being heretical, rejected the Saviour by treating Him as an impostor and persecuted the Church declaring it to be the usurper of its sacred patrimony. Even today, this Judaism remains the religion of the Jewish race and fuels its pride.

Now, « the Council wanted at all costs to reconcile the Church with Judaism in the third sense, by assimilating this impossible rapprochement with the call to the conversion of the Jews in the second sense, a traditional and holy calling, and by counting on our common recognition of the same heritage of Israel in the first sense. » All was said.

But this can only be done by dint of a conscious and relentless falsification of Holy Scripture, and of a rejection of the entire Church tradition. The amputation of passages of St. Paul’s Epistle to the Romans concerning the reprobation of the Jews is significant in this respect (CCR no 30, p. 7-8).

In conclusion, here is the formidable accusation made by Fr. de Nantes concerning such a text:

« Objectively, this Declaration excuses Humanity of all original and collective sin, the other religions of their errors and of their antichristian aggressiveness, and even more, Judaism of all its rage against Christ and against the Church.

« The Council, in the exact measure of this universal forgiveness, accuses the Church and makes her directly responsible for the divisions, rivalries, persecutions that devour humanity. In the end, it makes its Church the great divisive force among nations, the great fusspot among religions and the criminal usurper, Christ’s dishonest and untruthful invention that stripped Israel of its sacred patrimony. I do not exaggerate. Vatican II’s conclusion is to place the Church in the service of Humanity: it is the freewoman who is lead by her unnatural children to the servitude of her former slave. The inversion of the Mystery!

« Subjectively, this Declaration is the antithesis and the complete contradiction of traditional Catholic doctrine… Now the Council could not contradict Catholic doctrine in this manner without committing shameless falsifications of Holy Scripture which it claimed to rediscover and restore to its lost purity! This falsification, similar to the Jewish “perfidy” earns, I think, its authors the same malediction that formerly, fell on the deicides and their progeny. I can only remain a Catholic priest today by declaring solidarity with the 99 Fathers of Vatican II who resisted to the end the Declaration Nostra ætate. » (CCR no 30)

To claim the unity of all men outside Christ is an apostasy. There is no fraternity except in Him. One must be for Him or against Him, as he preached. The motivations of religious history are heroic as well.