WEDGED between Lumen Gentium, which defines the new condition of the laity in the Church, and Gaudium et Spes, which exalts its tasks in the modern world, the decree “ Apostolicam actuositatem ” on the Apostolate of the Laity (AL) is, in the opinion of the experts of the collection Unam Sanctam, the most outdated of the conciliar Acts. 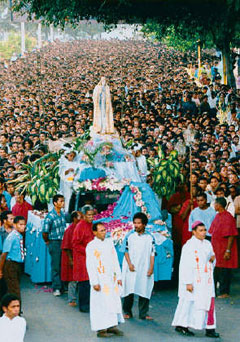 « The teaching of Vatican II, Fr. de Nantes noted in 1972, is so new that the entire work of Pius XI relating to Catholic Action was declared out-of-date, useless. But seven years after the Council, everything has progressed to such an extent that Vatican II is already obsolete in turn! Really, what a circus… All the same, let us attempt to describe this train that dashes before our eyes at such speed and try to discover in what direction it is headed, towards an undoubtedly mysterious destination »

The first novelty deriving from the definition of the Church as a People of God, is that the laity must be considered as full-fledged members of the community in which they are all equal, and no longer as a member of the “faithful” submissive to a dominating hierarchy.

« The laity derive the right and duty to the apostolate from their union with Christ the head; incorporated into Christ's Mystical Body through Baptism and strengthened by the power of the Holy Spirit through Confirmation, they are assigned to the apostolate by the Lord Himself. They are consecrated for the royal priesthood and the holy people (cf.1 P 2.4-10) not only that they may offer spiritual sacrifices in everything they do but also that they may witness to Christ throughout the world. The sacraments, however, especially the most holy Eucharist, communicate and nourish that charity which is the soul of the entire apostolate. » (AL, no 3)

All of them prophets, priests, and kings! All active and responsible subjects! Responsible for whom, for what? For everyone and everything… There we are thrown into complete illuminism and direct democracy. « The keyword of this advancement of the laity is no longer “ participation” but “ cooperation” by the laity in the apostolate of the hierarchy, or better yet, in the mission of the Church. Being sent directly by God and guided by Him, they will claim to work with but not under their priests! » (CRC no 26, p. 7)

And the field of activity, or rather of apostolate, that is specific to them is the service of the world for its complete human success: « Christ's redemptive work, the Council said, while essentially concerned with the salvation of men, includes also the renewal of the whole temporal order. Hence the mission of the Church is not only to bring the message and grace of Christ to men but also to penetrate and perfect the temporal order with the spirit of the Gospel.

In fulfilling this mission of the Church, the Christian laity exercise their apostolate both in the Church and in the world, in both the spiritual and the temporal orders. These orders, although distinct, are so connected in the singular plan of God that He Himself intends to raise up the whole world again in Christ and to make it a new creation, initially on earth and completely on the last day. » (AL, no 5)

This text can be interpreted in two ways. Conservatives will understand: « Evangelise, restore everything in Christ, and the rest, the progress of peoples will be given in addition » Progressivists, more faithful to the Council’s dynamic, will say: « Construct the world, make it a success, afterwards, you will offer it in homage to God » Number 7 proves them right:

« God's plan for the world is that men should work together to renew and constantly perfect the temporal order… The development and progress of all that forms the temporal order, not only aid in the attainment of man's ultimate goal but also possess their own intrinsic value. This value has been established in them by God. »

« It is not surprising, then, that the Council was the signal of a frantic laicisation of the Church; the secularisation of the clergy, the decline of worship and works, even a crisis in Catholic Action, a single word sums it up: apostasy. The transposition of religion into a political humanism, the transfiguration of earthly works into Gospel salvation and Eucharistic worship mark the ultimate contamination of the Church by the Promethean pride of modern man. It brought no propaganda success, moreover, since man has no need of the Church to nourish his old dream of becoming God… But the negative consequences of this immanent apostasy are disastrous: religion is emptied of its own substance, priests are deprived of their dignity and their sacred powers, while the laity find themselves endowed with a royal liberty, a priestly dignity and a prophetic insight in order to carry out their political action as a sublime oblation to God. » (CRC no 26, p. 9)

Let us now turn away from this fatal self-satisfaction and come back to the humble and conquering sprit of the Catholic Action dear to St. Pius X, illustrated by so many figures of our sweet and holy France.

REHABILITATING THE HOLY WORKS OF THE FAITHFUL

Vatican III will reunite the Church by putting everyone back in his proper place, in the whole Christ who alone is Prophet, Priest and King. This will not be a “return to clericalism”, explained Fr. de Nantes, « because the priestly and monastic work continues and develops in the religious and ecclesial works of the entire faithful people. The priestly hierarchy’s hold and the religious orders’ influence is not detrimental to the dignity and the activity of the faithful, on the contrary, they create them, nourish them, coordinate them and assure their immense fruitfulness. » (CRC no 26, p. 7)

In two exciting pages, our Father puts forward the program of a Catholic Action for the resurrection of the Church, whose key word is “participate”.

« To participate is, firstly, to get the most out of the rich blessings that the superior or the most perfect can pass on to the inferior or the less perfect. But it is equally and in the course of time, each according to his own condition and his personal energy, to take part in the perfect life and the action of those from whom he receives even the power of living and serving with them… Such is the exalting life and Christian perfection offered to the faithful, as much as they dare desire it. »

The “participation” of the faithful in the priesthood of the hierarchy, that is to say in the grace of its teaching, of its efforts of sanctification and of its spiritual government, will not come about in a democratic and libertarian manner, but each according to the exact degree of authority and power that he exercises over those who are entrusted to him.

« Thus, everyone, after having listened well to the preaching of the priests, will repeat it with his own authority to those for whom he is responsible: like the mother teaching catechism to her children. Everyone will sanctify himself through the Sacraments, but he must feel responsible for the religious life of his own, and is authorised to preside over domestic worship. All accept the Church’s discipline, but they all yearn to be the relays, the driving belts, everywhere their competence is exerted, the prince in his State through his laws, the industrialist in his factory through his justice, the mayor in his city through his solicitude, the worker in the management of the corporative patrimony and union action, etc. »

As for the “participation” of the faithful in the consecrated life of religious, it will have no other limit than each person’s spiritual perfection: « The perfect life and its influence does not depend in the least on social condition, but solely on charity, that is to say on one’s purity generosity and piety. It is in full liberty, open to everyone, that takes place this union of the faithful with the mystical life of the religious… How many laymen have rushed into it through the ages! Eager to know, love and serve God, they have risen very high and have raised up the multitude. Enamoured of God, sent by Him to the service of their brothers, they educated, instructed, cared for, assisted, and consoled their neighbour. »

These are the holy works that the Council of Catholic Reconciliation will restore. Priests will rediscover the heart of their faithful, and the faithful the heart of their pastors. Surprising spiritual exchanges of contemplation and circumincessant charity will take place between religious and holy souls living in the world. It will be good to be reconciled, life together will be delightful, action will be concerted, and there will exist the influence of the same joy in the same faith. « In this manner, the parish, the diocese, the papacy, will be re-established in all their dignity and their efficacy, stripped of all their incidental structures, of all the parasitic lay techno-bureaucracies. In this new-found ecclesiastical framework, renovated, under these authorities with a human and paternal face, the entire society with its many natural communities will be revivified by grace and Catholic truth. It will be Christendom once again. »