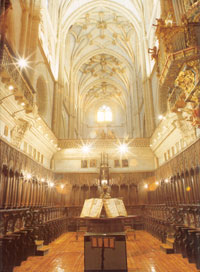 THE origin of the present liturgical reform does not go back to the Council, but to the XIXth century! It was not due to malicious intent of a Protestant or modernist infiltration, but sprang from the very heart of the Church. The ancient maxim Lex orandi, lex credendi, that Bossuet translated by: « We believe as we pray », explains the fact that the Popes who were the firmest in the faith were the instigators of an authentic liturgical renewal, since Blessed Pius IX supporting Dom Guéranger in his restoration of the Roman liturgy, Saint Pius X “the Reformer”, who desired that « his people pray sure of beauty » and « participate in the holy mysteries as the indispensable source of life », up to Pius XII, recovering the enlightened zeal of his predecessors in order to promulgate in 1947 the encyclical Mediator Dei, « a firm, dogmatic, magisterial act but also a liberating and pastoral act » (CCR no 80, p. 5).

Under the direction of these Popes, not at all “fixist” or “integrist”, a team of scholarly Benedictines, driven on by a sound faith, honest in their service of the Church, worked at Solesmes, at Beuron in Germany, at Maredsous in Belgium, to promote this movement. One only has to think of the admirable reform of Holy Week, promulgated by Pius XII in 1955! The Council arrived just in time to sanction fifty years of studies and experiments.

A MOST BEAUTIFUL TEXT, BUT…

From the promulgation of the Constitution Sacrosanctum Concilium by the Fathers of the Council on December 4, 1963, Fr. de Nantes had the impression that he was before a theoretically very beautiful text, coupled, however, with uncertain and disturbing “practical applications”:

« We find therein our faith, for which we suffer violence, oppression and persecution from the progressivists, our brothers, who have no other will than to lower the flame of Christian life from Heaven towards the earth, from the Spirit to the flesh, from contemplative adoration towards social struggle, from divine to human, a place of boredom, sin and despair. If they adopt the principles of this Constitution, if they organise their apostolate and their teaching around them, I maintain that we will all be reconciled! The discord lies in this essential point, and not elsewhere: religion is the service and the worship of God, not of man, but of man for God alone! » (Letter no 162, January 1964)

Eight years later, Fr. de Nantes explained that the main error of the Second Vatican Council was to have dealt, first of all, with the liturgy while the truths of the faith which must form its basis, which must throw light on and orient the entire work, were no longer certain, but on the contrary contested. » (CCR no 24, p. 9)

In the vagueness of the reforms in process, a bad spirit crept in, tinged with modernism, for which religion is no longer a divine work, revealed, imposed from on high, but a “real life” experience, either collective or personal, and with progressivism which considers worship to be a shameful escape, a selfish preoccupation compared with concern for apostolate of the masses.

The malfeasance consisted in, « after having changed the liturgy so as to make it into the expression of the new faith, forcing us to adopt it on the pretext that the Church has always proposed to the people its law of faith in and through the forms of her liturgy ».

The second error, just as fatal, was to have announced a complete revision of liturgical rites, « before defining the exact nature of the hierarchical constitution of the Church. On the contrary, to have dealt with it in a climate of demagogy and revolt. » This was to neglect the priestly character of the liturgy, « the most divine of human works ». Everyone was free to experiment, since the “Spirit” blows like a gale on the People of God! Then they began removing and simplifying, in the name of pastoral effectiveness, and more often than not, to demolish and entirely wreck havoc in the Sanctuary. To reconstruct, it was another question!

The liturgical reform was no longer a matter for the hierarchy alone, for the Apostolic See and its Congregation of Rites or for each bishop in his diocese, but for the assemblies appointed for that purpose, from the Council’s “ Consilium” commission right down to the lowliest of parish committees, forming a new parallel hierarchical chain, a canker of our modern democratic and decadent societies, driven by a sectarianism hitherto unknown in the Church. « The liturgy was the first thing to fall into the hands of reform maniacs, erudite archaeologists, professionals of subversion and group dynamics. » (ibid., p. 8)

« Being no longer either a source of grace or sacred praise, the modern liturgy has become histrionic, fastidious, painfully trite, void of mystery, dead. » The decline of our parishes was rapid. « Paganism is at our doorsteps », announced Fr. de Nantes, thirty years ago. This is where we now are.

How can one walk against such a current, reconstruct after such a cataclysm? On this point, our Father is cautiously and supernaturally optimistic: « Even though the feverish activity of the protagonists of the liturgical movement from the beginning of the century, has ended up transforming the Church into a heap of ruins, it has however, accumulated a large amount of material at the disposition of the wise builders of the future Counter-Reformation. (CCR no 24, p. 11)

The Third Vatican Council will, first of all, establish the divine faith of the Church, in opposition to modernist illuminism, which substituted the cult of man in the place of the cult of God. The holy Liturgy will become once again, something eminently sacred, a participation in the “Mystery of faith”. Is not the Mass the very Action of the Lord Jesus Christ, made present by his Church?

After having established the mystical and hierarchical nature of the Church, Vatican III will also recall that the liturgical function is a sacerdotal function. The priest acts in the Assembly “ in persona Christi”. « This power reserved for the sacerdotal Body has always spared the Church the fixism of dead religions and, at the other extreme, the mobilism of worship handed over to the whims of any human power or to the masses. An admirable reality that Vatican II ruined, that Vatican III will restore: the regulating role of Church life taken up by the clergy. » (ibid., p. 10)

Finally, the liturgy will regain its pastoral character. « The disastrous confusion made at Vatican II between pastoral and liturgy destroyed the liturgy and devaluated the pastoral », wrote our Father. Divine worship must not be stifled nor concealed, but prepared by a well adapted catechesis, so as to be celebrated by the entire people in intimate union with its pastor.

« Once the dogmatic reality of the worship of God has been assured and defended against any offensive return of the cult of Man, obedience to the will of God clearly signified by the sacred responsibility entrusted to the clergy to administer holy things and by the docility of the faithful to accept them according to the unchanging rites, then liturgical life will return to normal and will once again become, by the grace of God, an edifying, fruitful, unanimous work. » Our Father has many projects on this subject. Already, as country parish priest, he practiced in his parishes a “pedagogical bilingualism”.

« Vatican III will embark, he wrote, and all of us along with it, on vast and grandiose restoration, in which the liturgical Tradition put back in honour, will breathe new life into a body of well studied pastoral reforms. Everyone will find therein such spiritual benefit, such enthusiasm that this synthesis of new and old will create unanimity and concord amongst us in a general amnesty. One must have a big heart, delivered from all narrow-mindedness and all a priori other than the faith. Every question deserves to be examined, going beyond systematic conservatism and blind reformism. Both of these are lazy solutions, cowardly and gregarious. True traditionalism is progressivist. It consists in conserving and enriching liturgical life by an effort of piety, intelligence, imagination and zeal. » (CCR no 24, p. 11)

But, it is the Virgin Mary herself who will work the miracle of breathing a new life into our poor Catholic liturgy, so that « our “conversation” may be in Heaven » (Ph 3.20), and that devotion to the Sacred Hearts of Jesus and Mary extend to the ends of the earth. » Is not the Immaculate, in the vision of Tuy, at the foot of the Cross, at the heart, therefore, of our ceremonies? It is She who will, once again, show us how to please God, Father, Son and Holy Spirit, and with what love we must carry out the prescribed rites, so that we may be assured that He gives Himself to us with his grace, and in return, our thanksgivings are accepted by his divine Majesty, in the joy of love and filial piety, the intoxicating drink of the Elect.