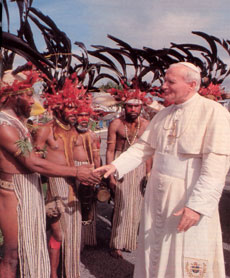 THE charter for what was to bring about in the Council a renewal of the Missions was the “Decree on the Mission Activity of the Church” (AM) beginning with the words « Ad gentes… » It was, in fact, the entire People of God, and each Christian in his own milieu of life, who was sent on mission to preach the Gospel to the “nations”, that is to say, to the pagans!

This beautiful theory concealed a perverse design that the experts, like Karl Rahner with his nebulous theory of anonymous Christians, attempted, by all possible means, to impose with the help of the Council. « Basically, our Father noted, the experts saw nothing in this schema on the Missions other than a new field of application for theories proclaimed elsewhere… It is a matter, as everywhere else, of hacking to pieces the living being in order to make it fit the abstract frame drawn by our technocrats. This could be achieved by “an effort of pastoral and theological reorganisation, a broadening of perspectives, to which a host of concrete suggestions are added”. Oh dear! Was there ever a better occasion to condemn colonialism, paternalism, sectarianism, proselytism? The accents of these declaimers reveal that, in them, the future of the Missions, the salvation of souls, the love of Christ, have totally given in to the desire to appear, in the eyes of the world, to be emancipated. Building the human city of peaceful coexistence and of pluralist dialogue, they have decided that the Missions would have to be integrated into it or disappear… Wedged between the new dogmas of religious liberty, ecumenism, dialogue, and the construction of peace, the schema on the Mission had no choice but to be adjusted, and this adjustment means the death of the missions. » (Letter to my Friends no 216, The Twilight of the Missions, November 11, 1965)

The missionary bishops of the Council reacted courageously, demanding with anguish, material and spiritual assistance from their peers for their missions, and to begin with, that the urgency and necessity of Missionary Action be recalled, which had been brought into question even in the conciliar aula. All the same, they obtained the reminder of the theological basis of the Mission: it is the Decree’s excellent no 7 (CCR no 27, p. 8).

However, right after no 7 and no 8, we are back to secular internationalism, the new aim of Catholic missions. It is a question of « revealing to men the authentic reality of their condition and their whole vocation, since Christ is the principle and the model of the renewed humanity, filled with fraternal love, sincerity and a spirit of peace that everyone craves… To tell the truth, the Gospel, in the history of mankind, even on the temporal level, was a leaven of liberty and progress, and continues to present itself as a leaven of fraternity, unity and peace. »

THE AGGIORNAMENTO OF MISSIONS

Until very recently, missions were the work of Christian countries of the West, which sent missionaries to far-off lands in order to establish the Church and convert pagans to it. Breaking with this religious paternalism combined with colonial prestige, the new evangelisation intends to start from a different principle: the sending into the world of “ministers of the Word”, free of all national and even ecclesiastical ties, the carriers of a “message” all the more credible, given that it would be presented in a climate of openness and dialogue.

The aim pursued now is not so much preaching in order to lead to “conversion” and the salvation of souls, as much as the reconciliation of a unified mankind, all become brothers. The new missionaries must be instruments of peace and communication among men, whereas, in former times, by preaching the Cross, Heaven, Hell and the need to change one’s life, they aroused hatred, divisions, persecutions...

In concrete terms, it was a question of freeing oneself of a rigid theological conception and of a weighty imperialist past, both of which were marred with presumption and racial pride. May the scandal of “collusion between mission and colonisation” be eliminated! According to Vatican II, the missionary must let himself be instructed by the values of the natives whom he has come to serve, helping them, if necessary, to rediscover their ancestral cultures, which are so many “seeds of the Word”. He must lose his western clothes and appearance and learn to “get along”, in strict collaboration with other religions. It was no longer a question of competing with Protestant missionaries, this division among Christians was a veritable scandal for pagans. In addition, he must extend this collaboration to non-Christians, for the defence of shared values: peace, development, democracy, human rights. And all this, so as to imitate Christ who divested Himself of all that He had, of all that He was, in order to live among men, as one of them, and to be a “sign” among them of God’s love.

It is with such principles, that missions were killed. « Obviously, the staggering collapse of Catholic missions followed. It has in the Council its adequate and proportioned cause. Of course, the difficulties dates from before; bad solutions were already advocated and implemented in many places. But the Council adopted all of them and promulgated them with the sovereign authority that it was and still is (quite wrongly) acknowledged to have. (CRC no 27)

After having rehabilitated these missionaries of former times, Vatican III will proclaim the ever-relevant need for Missions, « through a new doctrinal affirmation, more explicit than in the past. The affirmation of its pastoral dimension will be the same as well: evangelisation must be pursued based on its age-old effort, beginning with Christendom and in conjunction with its work of civilisation. Faith and realism go together, in opposition to the hesitations of Vatican II on faith and on so many of its temporal advantages, in favour of utopia… »

1. Outside the Church, no salvation. This maxim, which was the heroic motivation for a Phalange of missionaries without count, will be brought back into honour. There is no salvation, eternal or temporal, personal or general, except through faith in Jesus Christ and by membership in his visible Church, even if there may exist between her and the pagan masses invisible bonds only awaiting to become effective.

2. Expanding Christendom. Jesus Christ instituted the Church and she, in turn, built Christendom. This is an historical fact, a “sign of the times”. Therefore, truly Christian and reasonable missions come from Christendom. Any other view is utopian.

« As long as the Church condemns Christendom, which is its own fruit, wrote our Father, she will not bear any fruit among the pagans. “ Seek the Kingdom of God and His justice, and all these other things will be given you as well.” (Mt 6.33) The Church must be able to say to the pagan peoples: see Christendom, see these peoples who have received the Gospel, and admire the benefits that they received from it! The Mission will never be able to base itself on anything other than the success of Christendom, and beginning with it, as its unique, necessary and incomparable starting point. Running counter to human pride, Vatican III will say to those from the West: you are only great through Christ and the Church who made you what you are. And it will say to the other peoples: your salvation passes through your submission to this admirable age-old Roman, Latin, European, Western Christendom, which has all the treasures of Heaven and earth in order to hand them on to you. »