DEI VERBUM
I. The Sources of Faith 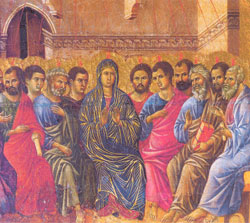 IN October 1964, the constitution Dei Verbum was bitterly discussed in the Council. Our Father made an in-depth commentary in issue 51 of the CRC. This should be carefully re-read. Right from its illuminism:

« Hearing the word of God with reverence and proclaiming it with faith, the sacred synod takes its direction from these words of St. John: « We announce to you the eternal life which dwelt with the Father and was made visible to us. What we have seen and heard we announce to you, so that you may have fellowship with us and our common fellowship be with the Father and His Son Jesus Christ » (1 Jn 1.2-3). Therefore, following in the footsteps of the Council of Trent and of the First Vatican Council, this present council wishes to set forth authentic doctrine on divine revelation and how it is handed on, so that by hearing the message of salvation the whole world may believe, by believing it may hope, and by hoping it may love. »

The Fathers of the Council therefore imitated Saint John, not so as to be « in communion » with him, according to his own recommendation, but so as to claim to be in direct communication with the Word of Life. But where had they « seen and heard » Him? With an amazing presumption, the Council thought that it was the Apostolic College, direct witnesses and inspired by Christ himself. « In referring to itself as “pastoral”, remarked Fr. de Nantes, it had no intention of belittling its importance by comparison with the preceding dogmatic Councils, but wished rather to give the impression of being of greater worth than all the rest of them put together. For did it not pretend to be directly inspired by the Word of God, and endowed with a mandate to found the Church anew? »

Now, what message did our “ inspired ones ” deliver? If they had merely repeated « the authentic doctrine of divine Revelation », defined by the Councils of Trent and the Vatican, it would have been perfect! but it was not worth claiming to be inspired for so little. On the other hand, if they claimed to renew it, as was the case, then it was a second imposture. By going back before the common catechism, before the doctrine of the Church, before Tradition, before even Scripture and the Apostles’ teaching, to arrive at the Word of God Himself, spoken by the mouth of the Father – « God said and so it was » – and becoming incarnate in the Event, the Life, the History, the Fathers of the Council really prided themselves to much, and embarked on a path opposed to the age-old practice of the Church.

After having analysed the entire mechanism of this subversion, Fr. de Nantes concluded: « From one pipe to the next, the entire channel of transmission of Revelation is dismantled, made useless. The People of God, having become a people of “ witnesses ”, are in direct touch with God, who speaks to it without any mediator and arouses in it “ the Spirit ”… This people gives witness through its entire life. It is a Word of God. »

How could such pretentiousness have been accepted, on 18 November 1965, by almost the unanimity of the Fathers (2344 against 6)? It is because in the meantime, the initial text had been interlarded with corrections that rectified it in the sense of the traditional faith, as in no 21, to which the minority had succeeded in adding what is indicated between brackets: « The Church has always venerated the divine Scriptures… She has always maintained them, and continues to do so, [together with sacred tradition], as the supreme rule of faith, since, as inspired by God… they impart the word of God Himself without change, and make the voice of the Holy Spirit resound. The same is true of the excellent no 10, imposed after a hard fight by the traditionalists.

However, the poison was inoculated into the veins of the Church by means of this dogmatic Constitution which smacked of heresy. Do you want a proof of its virulence?

In 1983, our Father chose in the interview of John Paul II with André Frossard this confidence: « I have never regarded my faith as “ traditional ”, explained the Pope. It had nothing to do with any kind of conformism; it was born in the depths of my own “ me ” [sic!], it was also the fruit of my mind’s efforts in seeking an answer to the mysteries of man and of the world… With interior maturity came the evidence that it contained a personal and free response to the Word of God expressed in Jesus Christ, Word incarnate. » (cf. CCR no 157, p. 13)

John Paul II’s faith is a self-worshipping one: « When God reveals Himself, he went on, and when faith accepts Him, it is man who sees himself revealed to himself and confirmed in his being as man and as person. »

This is what he taught in August 2000 at the World Youth Days of Rome, asking his “ dear young people ” to enter into the “ school of faith ” like the Apostles surrounding Jesus at Caesarea Philippi and in the Cenacle:

« You can all sense in yourselves the process of questions and answers that we have just been talking about. You can all measure the difficulties you have in believing, and even feel the temptation not to believe. But at the same time you can also experience a slowly maturing sense and conviction of your commitment in faith. In fact, there is always a meeting between God and the human person in this wonderful school of the human spirit, the school of faith. » The two of them alone, without the mediation of the Church?

Vatican III, A COUNCIL OF RECONCILIATION

After having condemned Vatican II’s illuminism, it will not suffice to recall the ancient truths, explained Fr. de Nantes. It would be necessary to make the effort to set out new dogmatic definitions. He wrote the « Devoutly listening to the voice of the teaching Church, we are certain of receiving the peace, joy, and spiritual fruits of salvation and eternal life through the Church’s ministry, which is the true Word of God. Moved by the grace of the Holy Spirit, granted to us in accordance with Christ’s promise, we accept in its entirety the Revelation of these Mysteries which illumines and transforms our soul and heart unto the resemblance of Christ Himself. As for us, according to the status and particular gifts of each, we pass on and teach this doctrine to all men… »

« The next Council will be first of all a reaffirmation of the Church, for She has been vilified, disparaged, despised by the very men of the Church all through these ten years [forty years!] of Reform. It shall proclaim the Church as the Spouse of Christ, faithful, wise and loving, who alone is able to reflect the splendour of the Countenance – human and divine – of Jesus Christ. Yes, the affirmation of the Church as carrier of the Gospel... the genuine Gospel of Christ inflames men’s hearts with the desire to be converted and move forward along the Way, on the path to perfection. Thus each individual lets himself be docilely reformed by the Church, however painful the operation may be, in order to obtain Eternal life. » (CCR no 21, p. 12)

The Pope and the bishops are subject as well to the ordinary and common, traditional teaching of the Church. The Holy Spirit is only given to them so that they may better understand the doctrine of their predecessors, teach it in turn, and if necessary develop it, but in no case contradict it, under the pretext of adapting it to the modern world! When this submission is once again the norm, the harmony of the sources of the faith – Scripture, Tradition and the Church’s Magisterium – will be re-established on the basis of this fundamental principle:

« God’s revelation reaches us in and by the Church’s teaching, wherein are intimately mingled the living waters of all her sources. »

Do not imagine the Church’s teaching as an unchanging, lifeless monolith. « These sources form a sort of organism with thousands of interconnections, constantly developing. In her teaching, the Church draws continually upon her sources. They are so vast, so rich, and divine! that she is constantly seeking to better understand these treasures that she appraises, meditates, classifies, interprets and translates into languages. » (CCR no 22, p. 12) Our Father, for fifty years, and Brother Bruno, his faithful disciple, are daily proof of this! Tomorrow, the world will drink from these living waters, when She who « treasured all these things and pondered them in her Heart » (Lk 2.19) will be known, loved and obeyed everywhere.