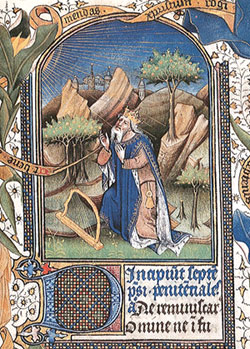 O UR Father has applied himself to explaining the psalms in several Community retreats, and on numerous other occasions. In October 1973, he wrote in the League page: « The study of the psalms gave us an extraordinary joy during eight days of retreat. Like all religious, we “ chant ” the Divine Office night and day. The psalms form its substance. Nothing could be more familiar. Right to our death, they will be the inspired language of our continual prayer. »

Our Father has asked me today to recapitulate our riches, by beginning to establish a good translation, not based on Latin but on Hebrew or Greek. Sometimes, in fact, the Hebrew is incomprehensible, as though someone had muddled everything. If one refers to the Greek, one notices that all is clear… and prophetic, “ Messianic ”, that is, announcing the Messiah, and therefore, Our Lord Jesus Christ ! Now, the Greek of the “ Septuagint ” is a translation dating to a period prior to events described in the Gospel; they were made following the original texts. The Dead Sea Scrolls, which are themselves prior to the Apostolic period, attest to this. But the “ official ” Hebrew Massoretic text, the most ancient manuscripts of which do not go back further than the Middle Ages, was determined by the Rabbis at the end of the first century of our era, right in the middle of the Synagogue's polemic against the Church. If one compares the Massoretic text to that to which the Dead Sea Scrolls bear witness, he discovers what Father Barthélemy called « intentional theological modifications ». We must therefore endeavour to re-establish the inspired text, delightful since it already contains all the Messianic faith and hope, and it burns with a very pure love of God from which that of the Church warms itself, seven times daily, to the rhythm of Divine Office. This is why, far from being incompatible, the Psalter and the Rosary complement one another, mutually enrich one another to form a perfect prayer, in which the soul takes delight before the coming of Jesus and Mary, which admits no delay.