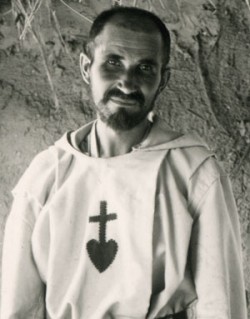 THE centennial of Blessed Charles de Foucauld’s martyrdom, on December 1, 2016, once again turns our hearts towards him whom our founder, Father Georges de Nantes, established as the protector of our Congregation and the patron of our Phalange.

This “ Blessed ”, not to say this “ Saint, ” until the judgement of the Church intervenes to canonise him, is our Father. It is always grave for sons to scrutinise their father, to analyse his heart and mind. For ourselves, we have chosen to take Blessed Charles de Foucauld for our model in order to follow him. This means that not only do we refrain from passing any judgement on him, but we let ourselves be taught by him, in the school of his disciple, Father de Nantes, who has given him to us as an example :

“ Their life will be inspired by that of Father de Foucauld, the universal brother. Like him, they will seek poverty and abjection in order to live humbly in the likeness of their One Model, Jesus. In His footsteps, they will desire to “ proclaim the Gospel by their whole lives ” and quietly spread among the infidels the Charity of the Heart of Jesus. ” (Article 3 of the Provisional Rule of the Little Brothers of the Sacred Heart of Villemaur)

So that you may join us in commemorating the centennial of the martyrdom of Blessed Charles de Foucauld, throughout the coming year, we shall present to you, month after month, chapter by chapter, the life of this great convert of the early 20th century. We will entitle this series : At the Source of our Father’s Spirituality, for as we scrutinise the life of Blessed Charles de Foucauld, we will be searching to see the influence he had on the development of our Father’s spirituality.

Our Father discovered Father de Foucauld in 1938, if one may say so, in the recreation room of the boarding school of Notre-Dame de France in Le Puy. Forty years later, he recalled the event in a narrative, restoring its fresh and vivid memory, which we shall extract from his Memoirs and Anecdotes. From that moment on, Georges de Nantes wanted to become his disciple and his son. However, for many long years, he was afraid that he might one day discover things that he could not accept, because fundamentally opposed to his own most sacred convictions, obliging him to part from him... Such was not to be the case ! Having carefully studied the documents in 1976, then again in 1996 in view of our community retreat, our Father was able to reaffirm in all serenity and truth that he is the son of the thought and of the heart of Charles de Foucauld. It ensues that we ourselves, the disciples of Father Georges de Nantes, claim this same filiation.

May Our Lord God through the intercession of Our Lady of Perpetual Succour, Blessed Charles de Foucauld’s great devotion, make us worthy of the heritage ! Ave Maria !