Brother Francis of Mary of Angels

“ Forty years of Catholic Counter-Reformation ” is an historical work relating the theological combats of Fr. de Nantes, from his priestly ordination on March 27, 1948. 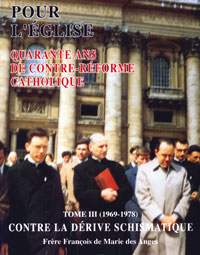 After the promulgation of the new Order of the Mass, Fr. de Nantes boldly entered the battle against the liturgical reform. He published the appeal attributed to Cardinals Ottaviani and Bacci even before it had been handed to the Pope ! However, from the autumn of 1969, the theologian of the Catholic Counter-Reformation had a new and even more pressing concern, that of defending the unity of the Church.

His dramatic discussion on July 21, 1969 with certain integrist priests, the controversies over the validity of the new ordo missae, his refutation of the errors of the sedevacantists, and the foundation of the League of the Catholic Counter-Reformation... such are the events and writings narrated or quoted in this present volume, which need to be known in order to understand the supernatural wisdom with which Fr. de Nantes led the traditionalists along the via media, between the abysses of schism and heresy during the 70's. The first campaign of the League, “ Tomorrow, Vatican III ”, was the result of considerable theological labour, and it remains a treasure of doctrine which will have to be put into operation when the hour of the Catholic Renaissance comes.

The detailed account of the appeal to Rome in April 1973, an event without precedent in the history of the Church, is enthralling: step by step we follow Fr. de Nantes and the representatives of the League as they attempt to hand their canonical complaint to Pope Paul VI. Suddenly, the papal dereliction of duty hits one in the eye. Six months later, the Liber accusationis is distributed among the Roman clergy. The reactions, replies and confidences of eminent members of the Curia, such as Fathers Ciappi and Duroux, Msgr. Mayer, and Cardinal Traglia, eloquently testify to the strength of the demonstrations and conclusions drawn by the theologian of the Catholic Counter-Reformation.

The history of the relations between Fr. de Nantes and Archbishop Lefebvre is accurately retraced and clarified by several previously unpublished documents.

The final chapter contains all the documents dealing with the talks Fr. de Nantes had with Cardinal Marty and Msgr. Etchegaray in 1978, with a view to a reconciliation. His request had only just been forwarded to Rome when the death of Paul VI occurred, in circumstances which appeared to confirm the justice of his analyses of the personality and the works of this pontiff. As for the election of Pope John Paul I – how marvellous ! – it proved that, despite the conciliar reform, the Church remained a permanent miracle, a brilliant sign raised up among the nations.