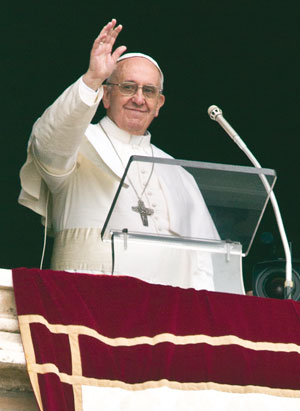 “ OUR sweet Christ on earth ”, whose living image in the 13th century was St. Francis, has now returned. Francis – just plain Francis as long as another Pope does not choose this name the ordinal number “ first ” is not used – is His Vicar in the 21st century to teach us again how to pray, which is the most difficult task in these times when irreligiousness rules society.

It was his first act of authority, immediately followed by a docile and enthusiastic throng, repeating with him : “ Our Father Who art in Heaven ” “ Hail Mary, full of grace ”, “ Glory be to the Father, and to the Son, and to the Holy Spirit. ”

On March 13, 2013, we relived hour by hour the great joy, gaudium magnum, of August 26, 1978, the fulfilment of the act of hope written as an epigraph on each issue of the Catholic Counter-Reformation in the 21st century : “ He will return with his immense heart, with his heart of fire, his poor man’s soul and his smile. He will return! And the Immaculate Heart of Mary will triumph! ”

He has returned ! There is nothing more certain than this triumph promised by the Immaculate Heart of Mary, since he himself had nothing more urgent to do the first thing the following morning than to pray to Her Whom John Paul I made the “ star ” of his pontificate.

Jean-Marie Guénois writes : “ It is rare for a cardinal whom no one thought about to emerge from the conclave as Pope. ” I beg your pardon ! We have been thinking about him for ten years. Reread our editorial of January 2003, entitled “ Gentle and Humble Anticipation : Is a New St. Pius X Coming ? ” The front-page photograph of the “ gentle and humble Cardinal Georges-Mary (sic !) Bergoglio ” made our Father Georges de Nantes say : “ It is truly the photograph of a saint ; I never grow tired of looking at it. ”