The Reparatory Devotion to the Immaculate Heart of Mary 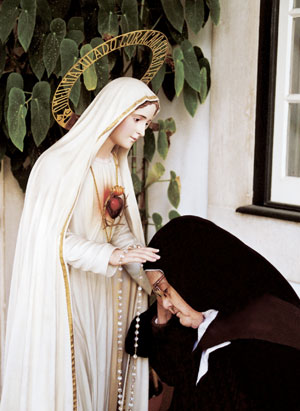 DURING Her second apparition at Fatima, Portugal, on June 13, 1917, Our Lady revealed to the three seers their vocation:

“ Jacinta and Francisco I will take soon, but you, Lucy, will stay here some time longer. Jesus wishes to make use of you to make Me known and loved. He wishes to establish in the world devotion to My Immaculate Heart. To those who embrace this devotion I promise salvation; these souls will be favoured by God, like flowers placed by Me to adorn His throne.”

During the third apparition, on July 13, 1917, in Her great prophetic Secret, the most important revelation of Fatima, which bears the stamp of extraordinary mystical, moral, political, ecclesial and dogmatic importance, Our Lady announced: “ I shall come to ask for the consecration of Russia to My Immaculate Heart and the Communion of Reparation of the first Saturdays of the month.”

At the same time, the Child Jesus said to her: “ Have compassion on the Heart of your Most Holy Mother, covered with thorns, with which ungrateful men pierce It at every moment, without anyone making an act of reparation to remove them.”

Then the Most Blessed Virgin taught her the reparatory devotion of the five First Saturdays of the month: “ Behold, My daughter, My Heart surrounded by thorns with which ungrateful men pierce Me at every moment by their blasphemies and their ingratitude. You at least try to console Me and say that all those who on the first Saturday of five consecutive months go to confession, receive Holy Communion, recite five decades of the Rosary and keep Me company for fifteen minutes whilst meditating on the fifteen mysteries of the Rosary, in a spirit of reparation, I promise to assist at the hour of their death with all the graces necessary for the salvation of their souls.”

A few months later, sister Lucy wrote to her spiritual director: “Our Good Lord in His infinite mercy asked me to perform reparation to the Immaculate Heart of Mary, and implore pardon and mercy in favour of souls who blaspheme against Her, because the Divine Mercy does not pardon these souls without reparation.”

Such are the “the desires of the Most Holy Hearts of Jesus and Mary: to save souls, many souls, all souls.”

Our Lady will grant the divine gift of peace to the world when the Holy Father approves the reparatory devotion of the five First Saturdays of the month and accomplishes in union with all the bishops of the world, a solemn and public act of consecration of Russia to Her Immaculate Heart.

Sister Lucy wrote to Father Aparicio, on March 19, 1939: “War or peace in the world depends on practicing this devotion united to the consecration to the Immaculate Heart of Mary. This is why I desire its propagation so ardently, especially because this is also the will of our dear Mother in Heaven.”

In June 1967, the seer replied to a friend: “As for the grace of peace, I am of your opinion. When everything seems lost, it is then that we will see the miracle. Before, it would have been attributed to the intervention of men. Such is my confidence, but this confidence demands prayer and penance.”

She added in a letter sent to another correspondent: “We cannot rest until we have succeeded in snatching the grace of peace from God’s Heart through the Immaculate Heart of Mary.”