I. The Whole Truth about Fatima 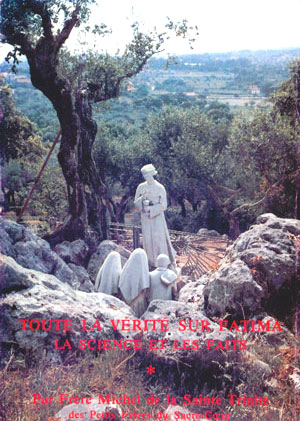 MAY 13, 1917: Three children of the hamlet of Aljustrel, near Fatima in Portugal, tend their sheep at the Cova da Iria. Lucy, the eldest of the trio, is only ten years old, and her two cousins, Francisco and Jacinta, are nine and seven. It is hardly surprising that these cheerful and ingenuous children who were also very pious, would become the object of the predilection of the Queen of Heaven, who would appear to them six times in a row, from May 13 to October 13, to pass on to them Her Message.

For one who studies closely the events of Fatima, it appears clearly that this manifestation of the Virgin Mary, the most spectacular one that ever took place, occupies a unique and truly extraordinary place in the history of our time.

For here, as in the Gospel, it is by unprecedented miracles that God expresses His Will to be heard and obeyed. From the beginning of the world, nowhere had anyone seen the equal of these divine signs. This incomparable miracle, predicted three months in advance as the certain proof and divine guarantee of the apparitions and of the Message of Our Lady, took place on October 13, 1917, in broad daylight, before seventy thousand witnesses, who were both astonished and enraptured: the prodigious “ dance of the sun ”, an historical fact as undeniable as it is stupefying, and inexplicable from the standpoint of purely natural forces.

Fatima is equally extraordinary for the scope of its great Secret, which is also without precedent. Since July 13, 1917, this unique Secret, in three distinct parts, dominates our whole history. A prophetic herald of divine chastisements which threaten us, along with magnificent promises of salvation, on the one condition that the simple requests of Our Lady, so clear and precise, finally be fulfilled – this great Secret describes for us our whole past and explains the whole present drama the world is going through: for we have witnessed and are actually living through the time of errors, wars and persecutions stirred up by Soviet Russia, predicted in 1917 at a time when nobody could have imagined them.

Faced with the event of Fatima, nobody could remain indifferent without giving proof of a strange levity of spirit, if not a blameworthy cowardice. No, it is clear that we must find out, with certitude, the truth. For if it is a question of true and supernatural apparitions, why not hear with docility this great Message of Our Lady and give it the attention it deserves? Thus, before all else Fatima imposes upon us the question of its veracity. And here, we must be insistent: its veracity stems neither from sentiment, nor from faith or even from devotion: but first of all from verifiable historical facts. This is the spirit in which we have undertaken and conducted this whole study.

Section 2: Apparitions of Our Lady

Section 3: The Miracle of October 13

11. Introduction: Elements of the Problem

12. The Modernist Solution of Father Dhanis

14. The Solution of the Historical Critique