(end of the 3rd century)

The Umm-Al-Jimāl inscription, written in Nabataean, was chiselled into a stone (length: 58 cm; height: 29 cm). It originally belonged to a funerary stele, but this fragment was reused in the wall of a house in Umm-al-Jimāl, west of Hauran.● 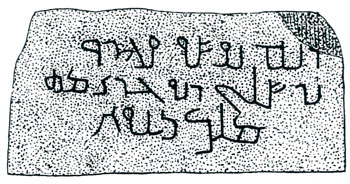 Everything in this text is unusual: the shape of the letters already announces Arabic characters, but the language remains Aramaic, an Aramaic moreover misshaped (cf. below on the left, the transcription in Hebrew characters). Without the second fragment of the stele, found at the other end of the city and bearing the Greek translation (below on the right), it would have been impossible to decipher this text whose “author was an Arab who knew Nabataean but only as an archaic literary language.”●

The importance of this inscription is not only linguistic, it is also historical. The Arabic legend presents a certain Jaḏīmat-al-abras, “Jadîma-the-Leper,” as the king of Ḥīra, a contemporary of Queen Zenobia of Palmyra (died 275 a.d.). This inscription, however, presents him as the “king of the Tanūẖ” people of Syria. 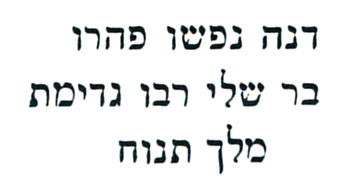 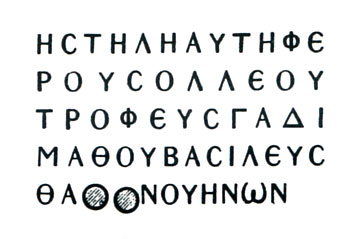 The two shaded circles in the last line of the Greek transcription represent hollows in the stone.