Translation and Systematic Commentary
Volume I

“This text [Sūrah 1], Blachère concludes, forms one whole, which is clearly marked off from the rest of the Qurʾān. It is neither an admonition nor a dogmatic or legal affirmation. It is a prayer, or as Goldziher put it: “the Pater Noster” of Islam.”● It is undoubtedly by antiphrasis that he wrote this, since in this text, God receives the most beautiful of names – merciful, master, king – with the exception of precisely, the name of “Father.” It is a deliberate omission, aimed at effacing that which constitutes the specifically Christian revelation. It is like the Kaddish, this “Our Father” of Judaism, which is also a “sanctification of the Name,” but which is anti-Trinitarian.

Our exegesis enables us to identify verse 1 with the zékhèr, the “memorial” of the most holy “Name,” which is dear to biblical and Christian piety. Verse 2, a formula of praise, an “ejaculatory prayer,” (David de Sola Pool) responds to this invocation. The inspired authors created a multitude of them, according to an unchanging structure that seems to constitute the law of the genre. It always includes: 1° a benediction, 2° the mention of the Name of God, 3° of His eternity.● These three elements, recognisable in the Gloria Patri…, the ancient Christian doxology (IVth century), are recognisable here in verses 1 and 2.

Here is the reason for this thanksgiving full of the “desire,” ʾal-ḥamdu, for the coming of “God’s Judgement” (cf. Is 26:7-9): rather than God’s “Lordship” over “the Worlds” (according to Blachère) or even (according to our interpretation) over “the centuries,” it is “the teaching,” which the name of rabbi evokes here, that merciful God dispenses from age to age. The thought that associates the divine ‘teaching’ with mercy is very profound. It is borrowed from Jeremiah who placed it at the fountainhead of the future New Covenant: “Deep within them I will plant My Law, writing it on their hearts. Then I will be their God and they shall be My people. There will be no further need for neighbour to teach neighbour, or brother to say to brother, ‘Learn to know Yahweh!’ No, they will all know Me, the least no less than the greatest – it is Yahweh Who speaks – since I will forgive their iniquity and never call their sin to mind.” (Jr 31:33-34)

Verse 3 seems to be nothing more than a doublet. In fact, it serves to prepare the mention of God’s Kingship (verse 4) as a function complementary to His magisterium, which is also exercised through mercy. Here we see an example of synthetic parallelism, a favourite technic of the psalmists. That is why, although this royal governance necessarily entails the punishment of the wicked (cf. Is 11:4), “Judgement Day” does not seem to bring an end to the mercy that is manifested from age to age, but it announces God’s governance over His elect, the Messianic salvation promised by Ps. 96:10 on which verse 4 closely depends, as we have seen, both for its vocabulary and its substance.

In order to thwart this Christian eschatology, which is entirely dependent on the Old Testament eschatology, as the fulfilment that corresponds to the promise, the masters of the rabbinical tradition imagined a judgement that would be rendered every year by God on the living, on Rosh Ha-Shanah, the Jewish New Year, and ratified on Yom Kippur day. Hruby has clearly shown, against Morgenstern, the late and anti-eschatological nature of this synagogal liturgy.●

Now, the author of our prayer manifests a sovereign independence, both from rabbinic Judaism and Christianity, with which he is familiar and which he willingly plagiarises. His intention though is to differentiate himself from them, with a desire to establish a direct link to the eschatology of the psalms and prophecies of the Old Testament, as if Jesus Christ, sign of contradiction between Christians and Jews, does not exist.

After praise, or berākhāh, comes worship, or ʿabodāh (verse 5), to use the terminology of the Jewish ritual, with a turn of phrase modelled on Deuteronomy 6:13, in the very chapter from which is taken the beginning of the profession of monotheism known as the šemaʿ yisrāél (Dt 6:4). After worship, comes entreaty: “Deign to show us the path.” The expression is borrowed from sapiential language and it encompasses a very universal sense of the Divine Law, which the Pater summarises in a phrase: “Your will be done.” (The Gospel According to Saint Matthew 6:10). It is a “narrow” path, according to the Gospel expression: “How narrow the gate and constricted the way that leads to life. Those who find it are few.” (Mt 7:14) Does it mean that the horizon of “survival” is Heaven? Is it a question of “finding one’s life” by “losing” it here below for the sake of Christ? Mt 10:39 No, the mystery of the Redemption is just as absent from this prayer as is that of the Incarnation, despite what Blachère claims: “Like the Pater Noster, this sūrah ends with an appeal to the Lord, who alone is capable of preserving Man from evil and sin.” This is carrying conformism to excess. Our translation does not justify such a parallel, nor does that of Blachère. Quite to the contrary, it is a question of “surviving,” by escaping the “wrath” of God or even worse, His “contempt.” There is not the slightest mention of repentance for the offence committed against Him, nor any plea for the help of divine grace against an offensive return of the spirit of evil and its temptations. So is it an earthly survival then? In a Deuteronomic horizon: “so that, as long as the heavens are above the earth, you and your children may live on in the land that Yahweh swore to your fathers He would give them” (The Book of Deuteronomy 11:21, a passage, that belongs to the šemaʿ)?

It is the second enigma of this prayer. 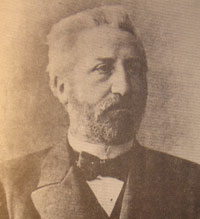 Ignác Goldziher (1850-1921), was a Jewish Hungarian scholar of Islam. He is considered one of the founders of modern Islamic studies in Europe. Goldziher’s major work is his careful investigation of pre-Islamic and Islamic law, Muhammedanische Studien published in 1890. In it, he showed how the ḥadīṯs reflect the legal and doctrinal controversies of the two centuries after the death of Muḥammad rather than the words of Muḥammad himself. The Jesuit scholar, Father Lammens, based his own works on these “insightful studies of Professor Goldziher” who had thus brought to light “the profoundly tendentious nature of the [Muslim] Tradition.”

Blessed be the name of the God, the Merciful One, full of mercy. 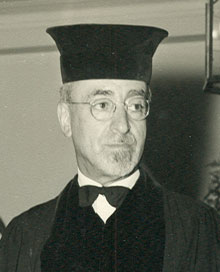 David de Sola Pool (1885–1970) was the leading 20th century Sephardic rabbi in the United States. A scholar, author, and civic leader, he was a world leader of Judaism. He studied at the University of London. He held a doctorate in ancient languages from the University of Heidelberg. Born in London, de Sola Pool was invited in 1907 to become the rabbi of the oldest Jewish congregation in the United States, located in New York City. His book The Kaddish (1909) remains a definitive and well-regarded work on the origins of the Kaddish prayer.

1 Blessed be the name of the God, the Merciful One, full of mercy. 2 Love to the God Master of the centuries.

7 The path of the upright man is straight, You smooth the way of the upright. 8 Following the path of Your judgements, we hoped in You, Yahweh, Your name, Your memory are all my soul desires. 9 At night my soul longs for You and my spirit in me seeks for You; when Your judgements appear on earth the inhabitants of the world learn the meaning of integrity.

He shall judge the poor with justice, and decide aright for the land’s afflicted. He shall strike the ruthless with the rod of His mouth, and with the breath of His lips he shall slay the wicked.

Say among the nations: Yahweh is king.

The Gospel According to Saint John 13:13

You call Me ‘Teacher’ and ‘Master,’ and rightly so, for indeed I am.

The Gospel According to Saint Matthew 4:17 +

From that time on, Jesus began to preach and say, “Repent, for the Kingdom of Heaven is at hand”.

God’s Kingship over the Chosen People, and through them over the world, is central to Jesus’ preaching, as it was to the theocratic ideal of the Old Testament. It consists of a Kingdom of “saints” of whom God will truly be the King because His reign will be recognised by them in knowledge and love. Jeopardised by the revolt of sin, this Kingship must be re-established by a sovereign intervention of God and His Messiah. It is this intervention that Jesus, following John the Baptist, announces as imminent, and which He achieves, not by the belligerent and nationalist triumph that the multitudes expected, but in a wholly spiritual way as “Son of man” and “Servant,” by His work of redemption that snatches men from Satan’s opposing reign. Before its definitive eschatological fulfilment, when the Elect will live close to the Father in the joy of the heavenly feast, the Kingdom appears with humble beginnings that are mysterious and challenged, as though it were a reality already existent, and which develops slowly on earth through the Church. Powerfully established as the Reign of Christ by God’s judgement on Jerusalem, and preached throughout the world by the apostolic mission, it will be definitively established and delivered up to the Father, by the glorious return of Christ, at the time of the Last Judgement.

33 So Pilate went back into the Praetorium and called Jesus to him, ‘Are You the King of the Jews?’ he asked. 34 Jesus replied, ‘Do you ask this of your own accord, or have others spoken to you about Me?’ 35 Pilate answered, ‘Am I a Jew? It is Your own people and the chief priests who have handed You over to me: what have You done?’ 36 Jesus replied: ‘Mine is not a Kingdom of this world; if My Kingdom were of this world, my men would have fought to prevent My being surrendered to the Jews. My kingdom is not of this kind.’ 37 ’So you are a King then?’ said Pilate. ‘It is you who say it,’ answered Jesus. ‘Yes, I am a King. I was born for this, I came into the world for this: to bear witness to the truth; and all who are on the side of truth listen to My voice.’

11 Then I saw Heaven open, and a white horse appear; its rider was called “Faithful and True.” He is a judge with integrity, a warrior for justice. 12 His eyes were flames of fire, and His head was crowned with many diadems; the name written on Him was known only to Himself, 13 His cloak was soaked in blood. He is known by the name, The Word of God. 14 Behind Him, dressed in linen of dazzling white, rode the armies of Heaven on white horses. 15 From His mouth came a sharp sword to strike the pagans with; He is the one Who will rule them with an iron sceptre, and tread out the wine of Almighty God’s fierce wrath. 16 On His cloak and on His thigh there was a name written: The King of kings and the Lord of lords.

O You whom we adore, O You of whom we want to sing in alternating choirs!

The Book of Deuteronomy 6:13

The Book of Deuteronomy 6:4

The Gospel According to Saint Matthew 10:39

Whoever finds his life will lose it, and whoever loses his life for My sake will find it.