Translation and Systematic Commentary
Volume I

To date, Brother Bruno has published three volumes of his study on the Qurʾān. He illustrated their respective covers with a key expression taken from the sūrahs that are analysed in the volume, superimposing the Arabic on the original Hebraic or Aramaic expression from which the author of the Qurʾān derived his Arabic expression.

This simple paste-up graphically illustrates the technique used by Brother Bruno to translate the Qurʾānic text. 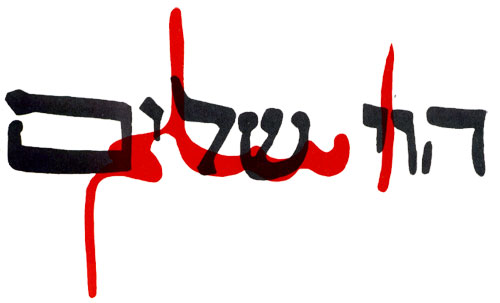 In calligraphic square script, the words of Yahweh to Abraham, according to the Aramaic version of the account of the Covenant: haweī šelīm, which means: “Be perfect!” (Tg Gn 17:1)

In red, the Arabic version of these same words according to the Qurʾān: ʾaslim (Sūrah 2, verse 131) which is traditionally translated “Submit!” but with no reason and no regard for the source text:

The word islām, is derived from the root šlm, which is common to Hebrew and Aramaic. It designates the religion contained in the Qurʾān. The word Muslim designates the believer whose religion is islām (paste-up Father Georges de Nantes)

In the coming months, the Catholic Counter-Reformation will begin to publish Brother Bruno’s monumental translation and systematic commentary on the Qurʾān, by instalments.

And Abram was the son of ninety and nine years, and Yahweh appeared to Abram, and said to him, I am El Shadai; serve before Me and be perfect in your flesh.

When his Master said to him: “Be perfect!” he said: “I am perfect for the Master of the ages.”